GEDORE and W&S Motorsport are linked by a successful cooperation

Remscheid, 13.10.2022 - Reliable, precise, durable tools are essential in professional motor sports. This is why the W&S Motorsport Team has teamed up with GEDORE in a strong cooperation. The tool manufacturer supplies the team with tools and accessories that are optimally tailored to the high requirements in the workshop and pit lane in terms of efficiency, performance and safety. In return, mechanics and engineers provide GEDORE with direct and competent feedback from real life which the company then uses for the continuous further development of its quality tools.
GEDORE supports the W&S Motorsport racing team with quality tools.

Patrick Wagner and Daniel Schellhaas have been racing together since the 2010/2011 season, and established their joint team W&S Motorsport at the end of that season. By setting up as a GmbH (limited company) in 2017, W&S Motorsport started expanding the company's motor sports service and accessories divisions as well as the racing team that can be seen on tracks in Germany and all over Europe.

In the search for a permanent tool partner for the racing team, the first choice fell on the manufacturer whose tools had already been used on racing cars everywhere: GEDORE. The tool competence that is reflected in the quality and durability of the tools played the key role here.

The team was given fully equipped tool furniture, a variety of screwdriving tools, special tools and high-precision torque wrenches. Then there is the tool service provided by the tool manufacturer as well as its special solutions in the automotive sector. In fact, everything that is needed for efficient maintenance and repairs on the vehicles. As the official sponsor of the racing team, GEDORE's logo features on two Porsche Cayman vehicles.

Click this Button and get a PDF of the Press Release

With the new TORCOFIX 2.0 models, GEDORE is further expanding its comprehensive expertise on the subject of torque. Precision and safety are the top...
Learn more 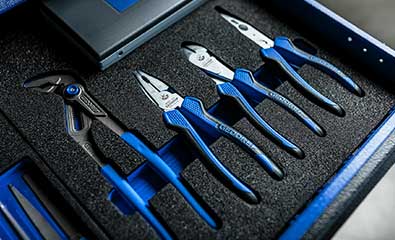 GEDORE has a wide portfolio of efficient pliers in its range, from all-rounders to special tools, which are optimally adapted to their respective area of...
Learn more
Stripping, dismantling and crimping

New tools for cables and wires

New tools for stripping, dismantling and crimping from GEDORE. This ensures maximum efficiency when working on cables and their connectors.
Learn more
Press Release

Puller set with three pairs of hooks for individual adaptation to the application.
Learn more
For Wheel Change

Do you have any questions or suggestions? We look forward to your message. The agency HEREANDNOW.STUDIO has been a GEDORE partner for many years and is your contact for all media and press relations issues.